Why go to Brooklyn?

You must visit Brooklyn at least once in your lifetime because it’s a great place to be. It has a distinct personality. It features diverse ethnic communities. You may find halal lamb, kosher chicken, Asian dishes, pierogi ingredients, and Russian vodka, to name just a few. Brooklyn is home to numerous parks, taverns, music venues, and galleries.

What is Brooklyn famous for?

Brooklyn is famous for several of New York City’s most famous landmarks, including Coney Island, the Brooklyn Bridge, and Prospect Park. 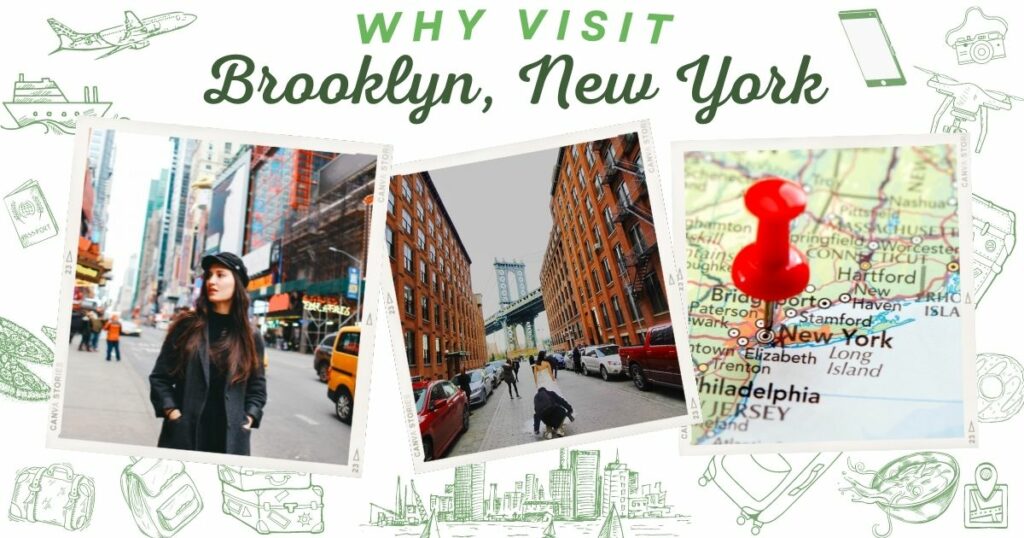 How big is Brooklyn?

Brooklyn is about 180 square km or 69 square miles in size.

When is the best time to visit Brooklyn?

The best time to visit Brooklyn, New York, is the month of October.

How many days do you need to see Brooklyn?

When visiting Brooklyn, you can fully explore the city within 1 to 2 days.

What is the cheapest time to go to Brooklyn?

The low season (flights) to visit Brooklyn is January through March.

Is Brooklyn an expensive city to visit?

Visiting Brooklyn for seven days can cost as little as $1,934 for a single traveler, $3,473 for a couple, or $6,512 for a family of four. With an average price of $139 per night, hotels in Brooklyn can cost anything from $92 to $591 per night. In comparison, most vacation rentals cost between $160 and $500 per night for the entire property. The cost of transportation and dining out might range from $64 to $169 per person per day, depending on the activities you plan to participate in.

How to save money when visiting Brooklyn?

The best ways to save money when visiting Brooklyn are:

What food (and drinks) is Brooklyn known for?

Things you need to eat in Brooklyn before you die:

Is Brooklyn safe to visit?

It’s safe to say that Brooklyn is one of the safest cities in the country. In 2020, there were 388.11 violent crimes per 100,000 persons in Brooklyn. Brooklyn was ranked 75th in the United States’ 100 largest cities by population. As a result, Brooklyn was rated as having a lower crime rate than 74 of the nation’s most populous cities.

What is the best way to get around in Brooklyn?

The best way to get around in Brooklyn are:

What are the neighborhoods or areas I should stay in when I visit Brooklyn?

The best areas you should stay in when visiting Brooklyn are:

The best areas for food and drinks when visiting Brooklyn are:

The best areas for shopping when visiting Brooklyn are:

What should I do on my first trip to Brooklyn?

If you are visiting Brooklyn for the first time, you can walk across the Brooklyn Bridge, wherein you will witness the scenic skyline of New York City; you can also go to Roberta’s for some delicious pizza and Jacques Torres Chocolate for the best hot chocolate in New York City.

Is Brooklyn a good place for solo travel?

When traveling solo, you may find the city of Brooklyn a little intimidating. Still, with proper preparation, it can be an adventure you’ll never forget! To stay safe in the city, you should always be alert to your surroundings, avoid strolling alone at night, and, if necessary, go out in groups during the night.

Is Brooklyn a good place to visit for a family with kids?

When visiting Brooklyn as a family with kids, you can spend time walking around the Brooklyn Bridge. It is perfect for viewing the scenic view of New York City kids. As you stroll down the pedestrian walkway, prepare to be awed by the scenery. Bring a folding stroller for little ones so they don’t get too worn out on the 1.3-mile trek across the bridge. Take in one of the most stunning vistas of Manhattan!

Is Brooklyn a good place for couples?

When visiting Brooklyn as a couple, you can have a romantic getaway by visiting the Prospect Park Boathouse. Smorgasburg and outdoor concerts in the summer are just two of the many fun events in Prospect Park. A fantastic place to play, picnic, and take in the scenery. On the other hand, the Boathouse is a must-see for anybody visiting the park. You can bring a blanket and relax in the nearby meadow while admiring the Boathouse or take a trip across the lake’s bridge to get a different perspective.

What are the best annual events in Brooklyn?

The best annual events in Brooklyn that you cannot miss are