Planning to travel to Nauru? Explore the top activities to do and sights to see in Nauru to make the most of your time there. Get the most out of your vacation by exploring the best things to do in Nauru and the best places to visit in Nauru below. Wondrous Drifter is a Web 3 travel company that brings the best travel ideas to travelers. 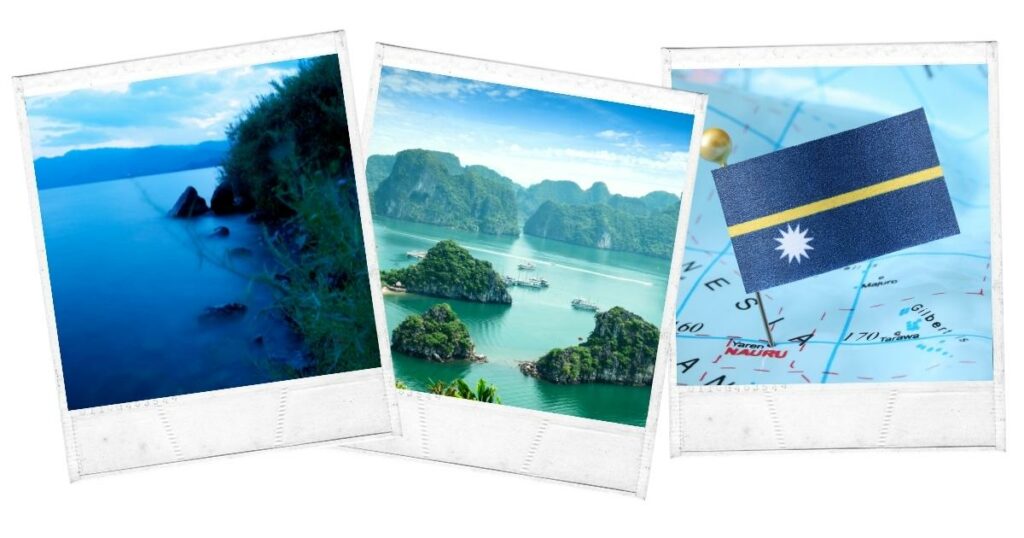 Now is the perfect time to unwind by the Bay.

Anibare Bay is a huge bay, and its beach is often considered among the most stunning on the island.

It is one of the most famous tourist attractions on the island of Nauru. It is known for having highly unique coral structures to offer visitors.

At low tide, the pinnacles on the beach present photographers with the most photogenic opportunities.

The volcanic activity that occurs deep below the surface of Nauru is responsible for shaping the Bay.

Anibare Bay is known for its serene atmosphere and breathtaking scenery, making it an ideal place to unwind and soak up some rays.

However, visitors can’t swim in this location since the strong currents may be dangerous. They should take great caution when in the area.

You may also taste regional cuisine at any time of day in a restaurant that is conveniently located nearby.

Enjoy the view at the Anibare Bay soon! 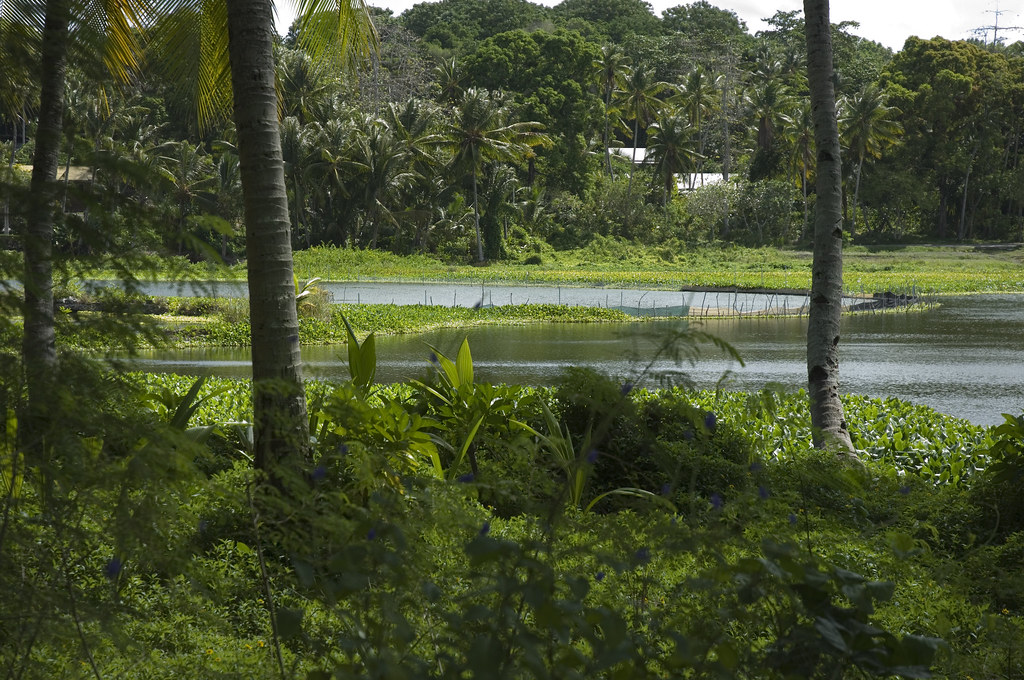 If you want to take some great pictures of Nauru, you should head to Buada Lagoon.

Nauru is home to a freshwater lake known as Buada Lagoon, surrounded by land.

To put it another way, it’s a type of lake that doesn’t overflow into other bodies of water, like the ocean or river.

The Buada Lagoon attracts the most tourists of any location on the entire island since it is the most beautiful spot in the country.

During your stay at the lake, you may have a pleasant stroll and capture some breathtaking images with your camera.

However, due to the filthy state of the water, swimming in the lake is strictly prohibited for anybody and everyone.

You may also come across a songbird native to Nauru who has made the peaceful environment of the Buada Lagoon it is home for its breeding grounds.

If you find yourself on the island of Nauru, you really must make time to travel to Buada Lagoon. 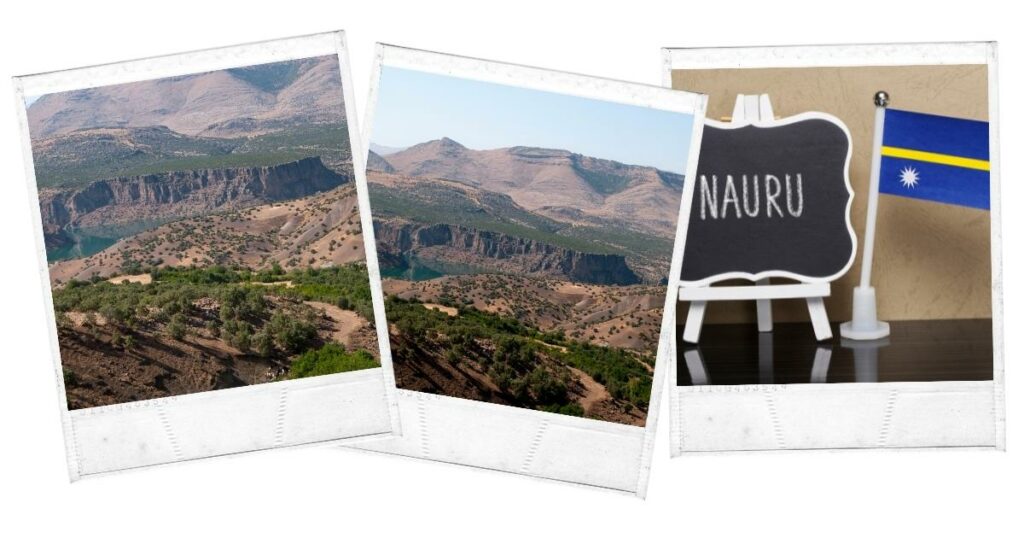 Explore the murky past of the world’s smallest island nation and get a sense of its fascinating history.

The Central Plateau, also known as Topside, is a plateau on the island of Nauru that is home to the island’s historical sites.

Phosphate was mined on the Central Plateau for more than a century, giving the land the appearance of a rocky surface similar to the moon.

While exploring the region, you may come across some relics from a previous war, including Japanese guns, a downed aircraft, and an abandoned railway.

The site may be explored on foot by visitors with the guidance of local guides through various available walking paths.

Remember, watch out for the jagged coral pinnacles scattered everywhere as you travel along the trails.

If you can travel onto the island, you should go check out Central Plateau. 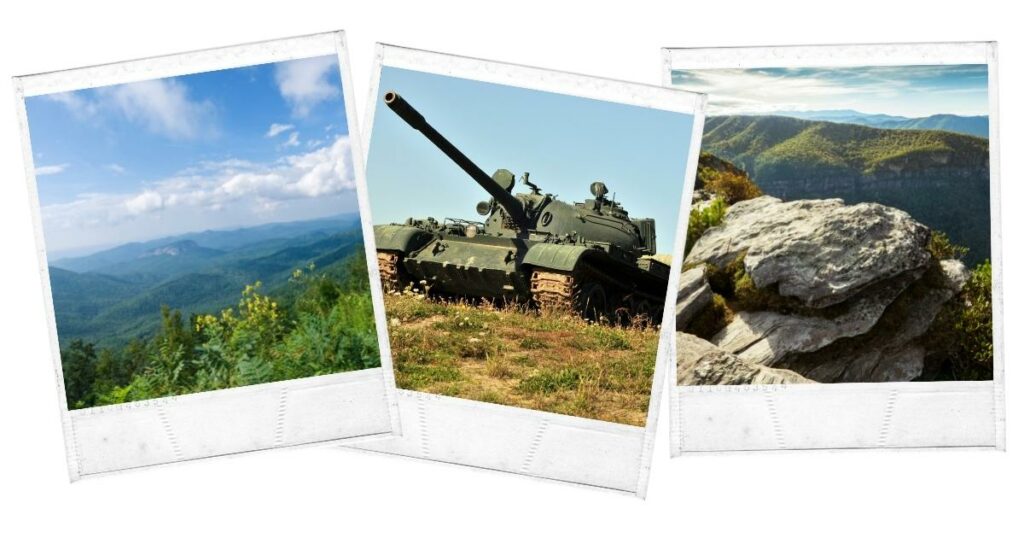 Have you ever thought about what it must have been like to live during World War II?

Have you ever wanted to get a glimpse of it?

Enter the country of Nauru, which is where the events of World War II took place.

It took place atop Command Ridge, the highest point of Nauru, which the Japanese held at one point during the war.

As a part of their operations in the Pacific War during World War II, the Japanese seized Nauru for three years.

As soon as the war started, the islands around Japan’s South Seas became very important to the Imperial Navy, whose job was to protect Japan’s far-flung Pacific territory.

Their rusting World War II guns, including two enormous rotating six-barrel weaponry, were still stationed at the Command Ridge bunker when we visited it.

There is also a communications bunker that you may enter, and inside, you can see some Japanese writing.

At Command Ridge, you may experience life as it was in the past.

One’s existence is either a thrilling journey or a dull bore. The choice is yours. Time to see the world. Kick off your world travel by checking out our travel the world and the seven seas guide. When traveling the world, a visit to the United States is an absolute must. Do you want a true American adventure? Discover the best states to visit in the USA. 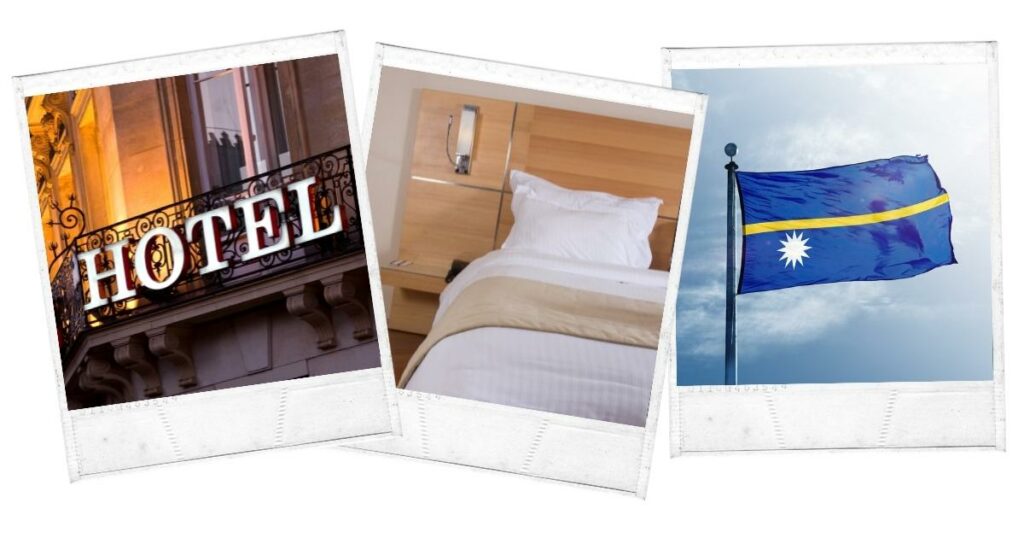 As Nauru is one of the least visited countries in the world, the Menen Hotel has become the most preferred hotel on the island.

The Menen Hotel, also occasionally referred to as the Menem Hotel, is the most comfortable place to stay on the island of Nauru.

There are many types of rooms available, with the twin rooms featuring refrigerators, microwave ovens, and televisions.

The employees of the Menen Hotel are known for their willingness to accommodate guests’ needs.

The Nauru International Airport is just a 15-minute drive to the hotel or a one-hour walk.

In addition, the Menen Hotel provides a shuttle bus that waits outside each terminal to pick up guests who have just landed.

During your time in Nauru, stop by the Menen Hotel. 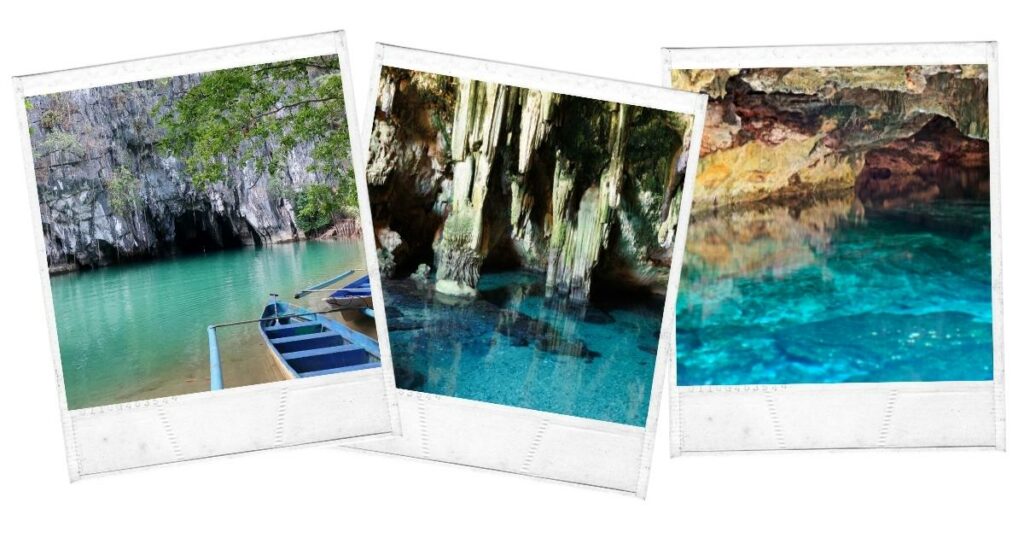 You will be amazed to discover that the caves of Nauru have such a secret underground lake!

One of the more intriguing attractions in Nauru is the Moqua well and caves park.

Moqua Well is a small underground lake that may be found within the Moqua Caves, an outstanding geological wonder that must be seen.

Additionally, Moqua Well is considered one of the most significant sources of freshwater on the island of Nauru.

During World War II, it served as the main potable water supply for the inhabitants of Nauru.

In today’s world, the lake has grown into a well-liked gathering spot for residents who like spending time there beneath the canopy of the surrounding trees.

Since the caves are very shallow and narrow, it is best to visit with a local guide.

It is well worth your time to go visit Moqua Well. 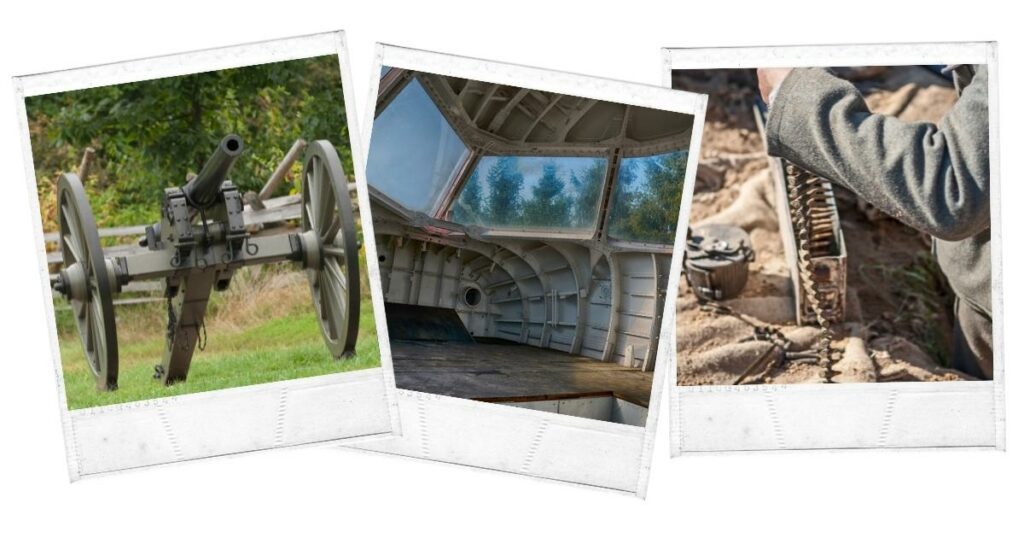 Do you know what makes reading about history even more exciting than it already is?

Being at a place that is rich with historical artifacts!

The Nauru Museum, also known as the Nauru Military Museum, is home to items that date back to the early days of the island country as well as World War II.

The entirety of the collection was discovered on the island of Nauru.

In fact, almost all of the objects were collected by Stan Gajda and given to the museum as donations.

The museum features artifacts from the period of World War II, including Japanese machine guns, weapons, bombs, airplane parts, and a great deal more besides.

Furthermore, there is an audio-visual collection that documents the history of Nauru’s history that spans more than a decade.

Don’t miss out on the cool historic items at Nauru Museum today! 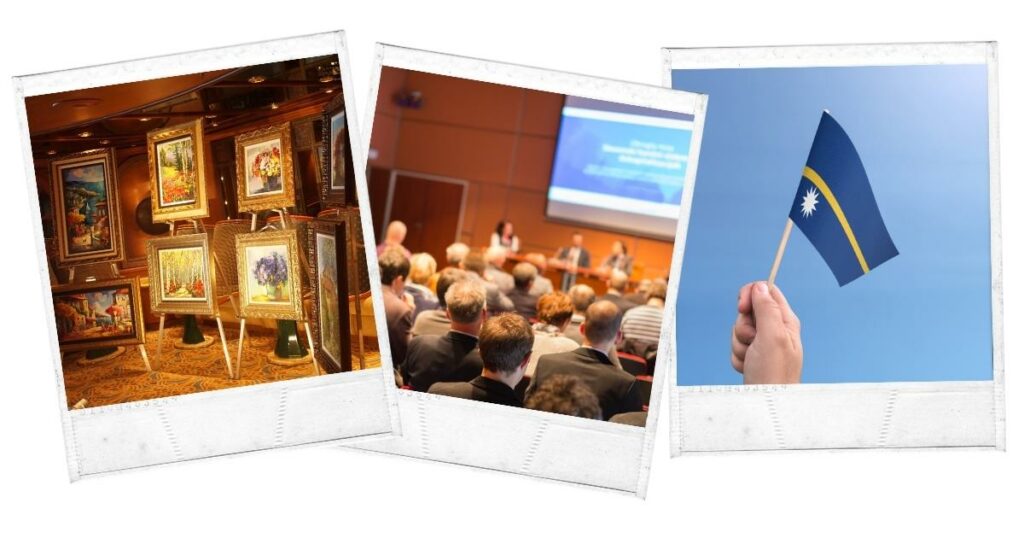 Take advantage of this once-in-a-lifetime opportunity to roam the halls of Parliament while it is in session.

The Nauru Parliament House is a wonderful symbol of a little nation that is gradually opening itself up to the rest of the world.

It serves as the location of the country’s legitimate governing body, the Nauru Parliament.

Step inside the building to view a small collection of art and artifacts from Nauru’s past, which will provide insight into the island’s history.

The 19 elected representatives that make up parliament meet in immaculately kept chambers open to the public.

Photographs of this structure can be taken by guests while they are outdoors in the area.

It is interesting to note that a foreign flag is hanging outside of the building.

This flag is changed once a week to reflect the country whose ambassador is currently stationed off-shore and is now in residence on the island.

You haven’t made up your mind to go to Nauru yet, have you? Check out reasons to visit Nauru at least once in your lifetime here.