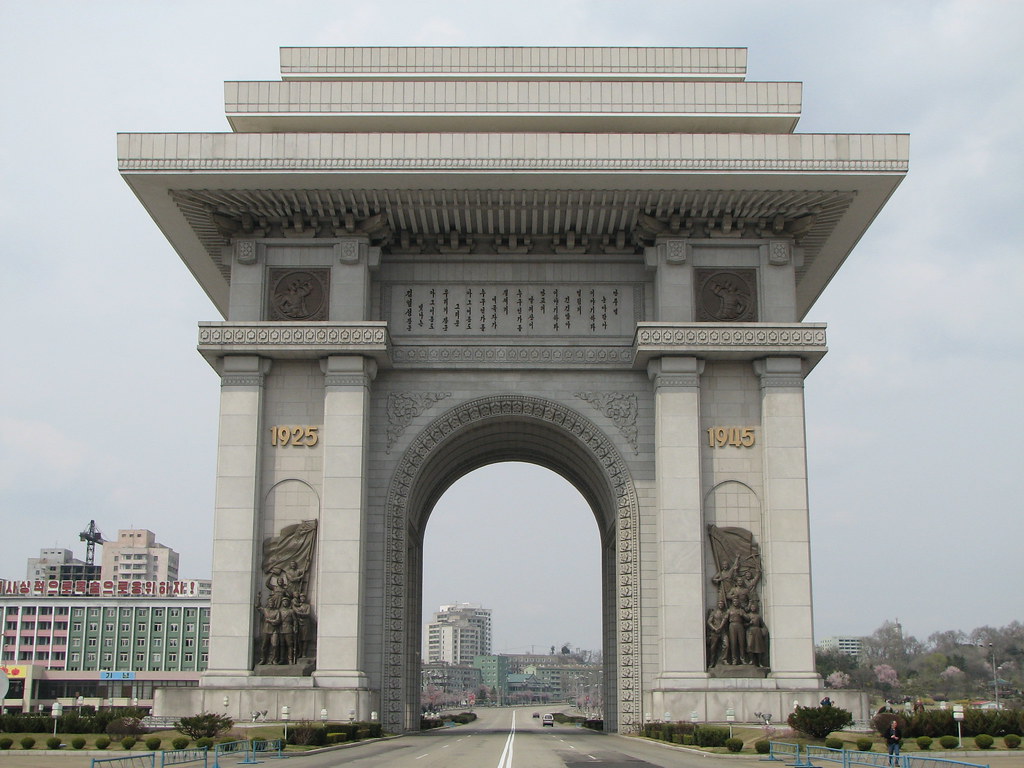 Look at this magnificent structure, a historical landmark in Pyongyang.

The Arch of Triumph is a massive edifice that towers over the city’s rest.

It appears to be made of white granite and ornamented with numerous reliefs, inscriptions, and carvings.

The Arch of Triumph bears a remarkable resemblance to the Arc de Triomphe in Paris. However, it is taller than its Parisian counterpart.

Located on a large, open square, it stands out even more because of its relative remoteness from the rest of the city.

Views of nearby landmarks like Kim II Sung Stadium, Moran Hill, and the Ryugyong Hotel can be seen by climbing to the observation deck’s vantage point.

Visit the Arch of Triumph on a guided tour. Time to have a look! 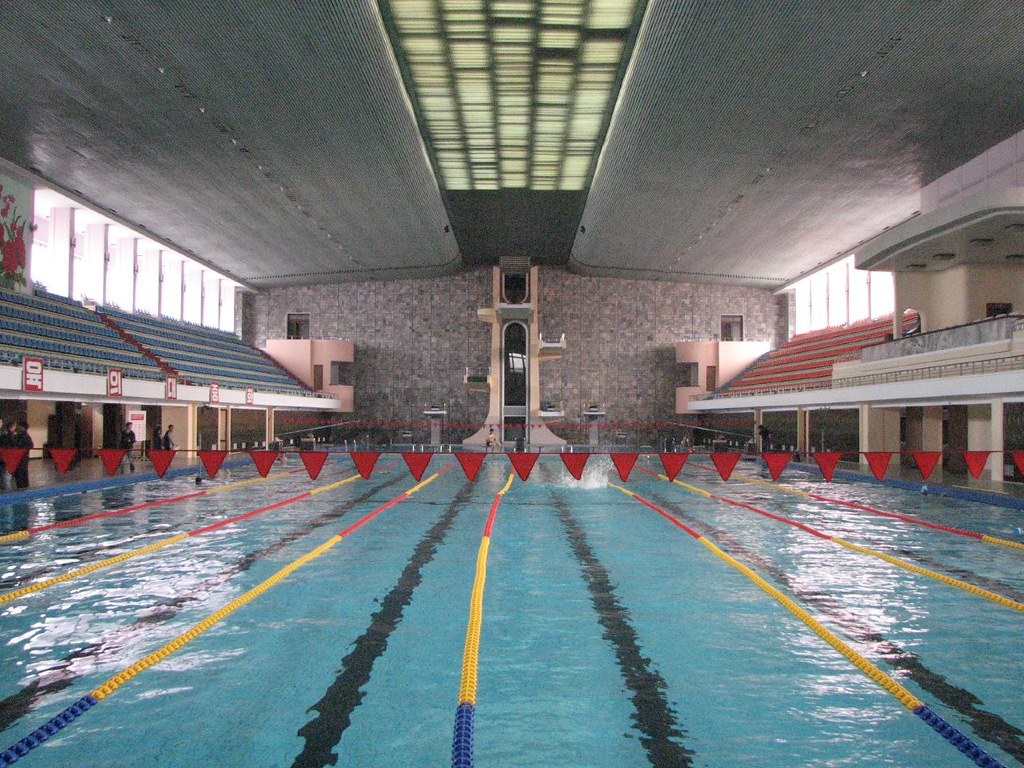 Check out the city’s largest complex and one of the city’s most recognizable structures simultaneously.

People from all walks of life and tourists alike use this complex.

This structure is home to a wide variety of services, including public and private baths, soft-drink stands, hair salons, and various other amenities intended to promote Pyongyang’s workers’ health and cultural development.

You can select a haircut style on the display boards if you’d like some grooming done. Hairdressers can also style your hair following your own preferences.

The Olympic-sized swimming pool is one of the main attractions of this complex.

However, please note that the line to get in can be long since this complex has the best amenities.

Regardless, paying a visit to this complex is well worth your time.

The Changgwang Health Complex should be on your list of things to see and do!

Make sure to see one of the most important icons in North Korea.

The statue of Chollima is located in Pyongyang, the capital of North Korea.

Only a few meters separate it from the nearby Mansudae Grand Monument.

Translated, “thousand-mile horse” is the name of the Chollima.

Often depicted as a winged horse, the mythical creature has its roots in the Chinese classics.

Many North Koreans, particularly those in their older years, see the statue as a powerful symbol of their country’s history and culture.

The Chollima is also a symbol of the heroic and tireless spirit of the Korean people, who are always coming up with new ideas and making fast progress.

The statue is one of a slew of Chollima symbols throughout the DPRK.

Others also include the Chollima team, the nickname given to the national soccer team, and the Chollima Line of the Pyongyang Metro.

Take a look at this historic site while you’re in Pyongyang! 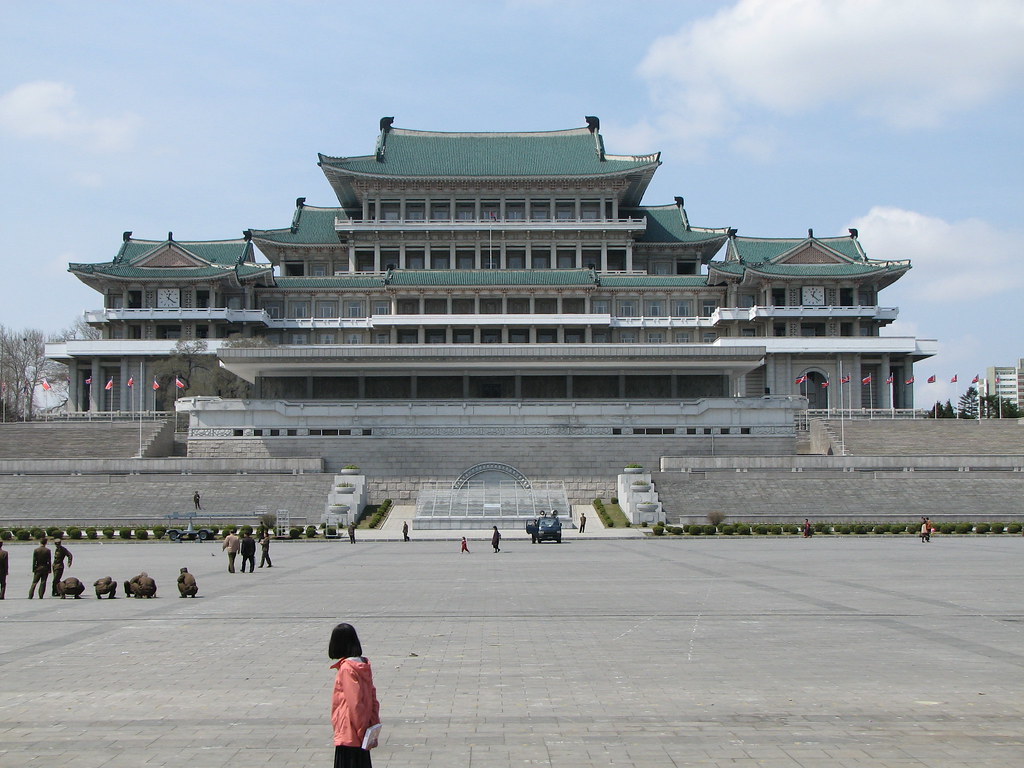 Pyongyang’s Grand People’s Study House is a must-see for visitors.

It has an electronic LED board that shows the most recent additions to the library’s collection of books.

A music appreciation room in the library also allows students to hear music from around the world.

You can access an observation balcony at the library’s highest level, which is a must-do for any library-goer.

You’ll see some of the capital’s most famous landmarks from this vantage point.

You will be escorted around the library by a local employee as you visit it.

When in Pyongyang, make sure to visit this library! 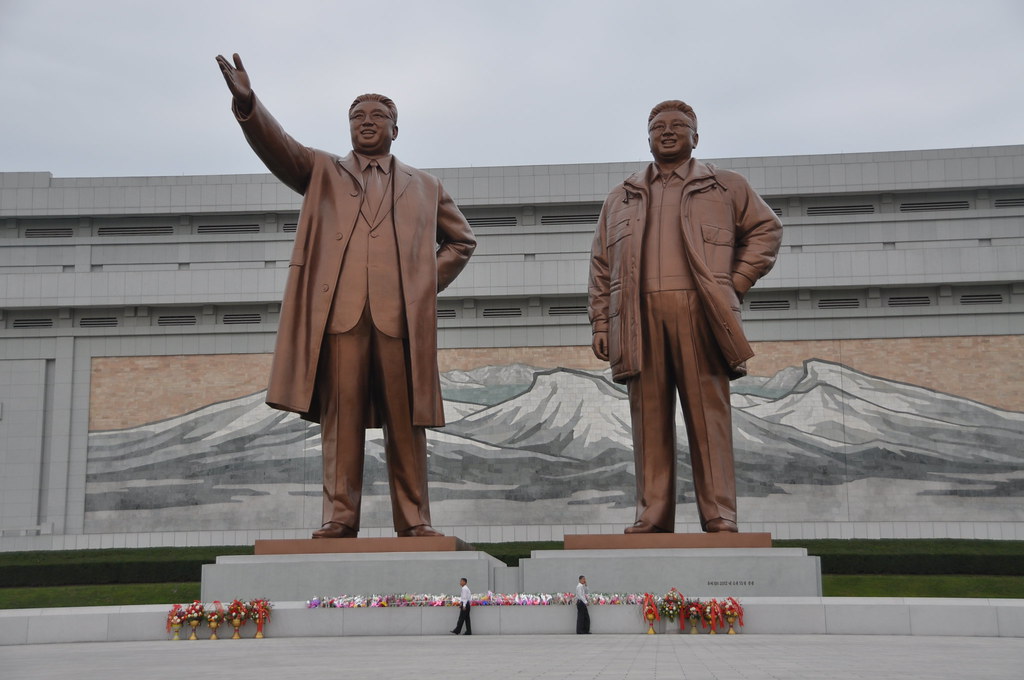 On a trip to Pyongyang, this is a must-stop!

The Mansudae Grand Monument is a well-known landmark in North Korea.

They’re perched high above Pyongyang and provide spectacular views of the city.

The Mansudae Grand Monument is described as awe-inspiring in its size and grandeur.

The Korean Revolution Museum, one of the world’s largest museums, may be seen behind the statues.

In addition, many individuals in the city visit the sculptures to take wedding photos as a memento of their union.

If you decide to visit the statues, remember to always show respect.

In Korean culture, bowing is a sign of respect, so everyone who wants to look at the statues has to do it.

This should definitely be on your list of things to do when visiting Pyongyang!

Live without making excuses, and travel without looking back with remorse. Go travel; trust us, it’s worth it. Experience different cultures around the world by checking out the list of the countries to visit around the world. When you roam around the world, you have to visit the USA. America is like nowhere else. Discover the best state in USA to travel. 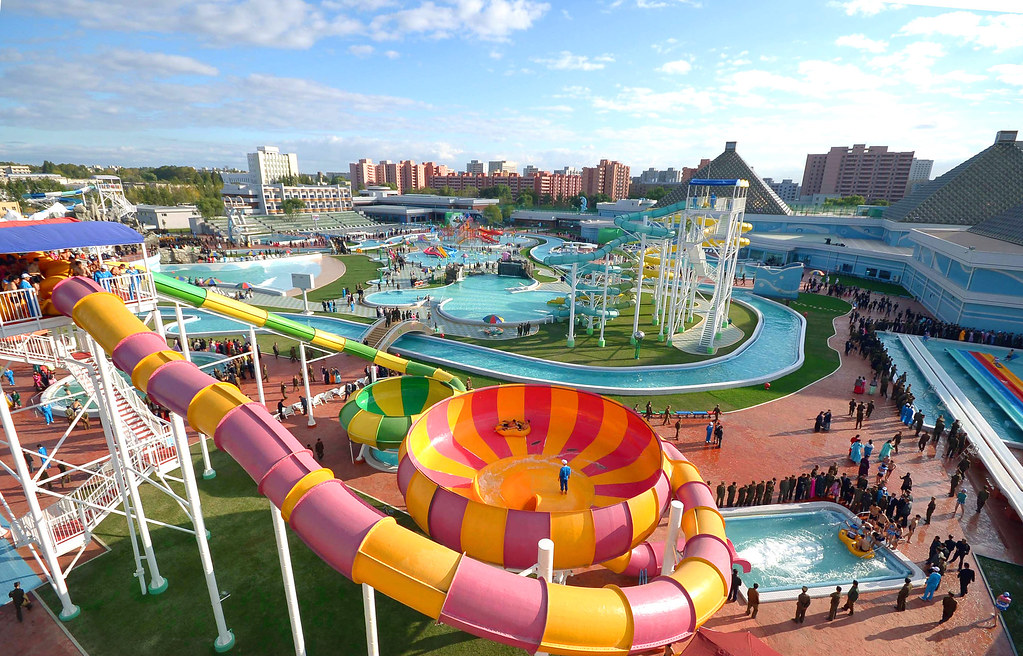 You’re in for a treat when you arrive at this weekend’s hotspot!

The Munsu Waterpark in North Korea is the country’s largest water park.

It may be found in Pyongyang’s Munsu district.

This waterpark has a variety of fountains, waterslides, diving sites, pools, children’s playgrounds, and so much more.

Do not worry if you do not wish to be submerged. Munsu provides a wide range of other services, as well.

You’ll find various eateries and a top-notch cafe in the area.

Also in the foyer is a life-size wax statue of Kim Jong-il, sculpted by the Mansudae Art Studio, to welcome guests.

Overall, if you want to unwind, Munsu Waterpark is the spot for you. It’s even more spectacular because it’s open year-round.

Check out this place if you’re planning a visit to Pyongyang. 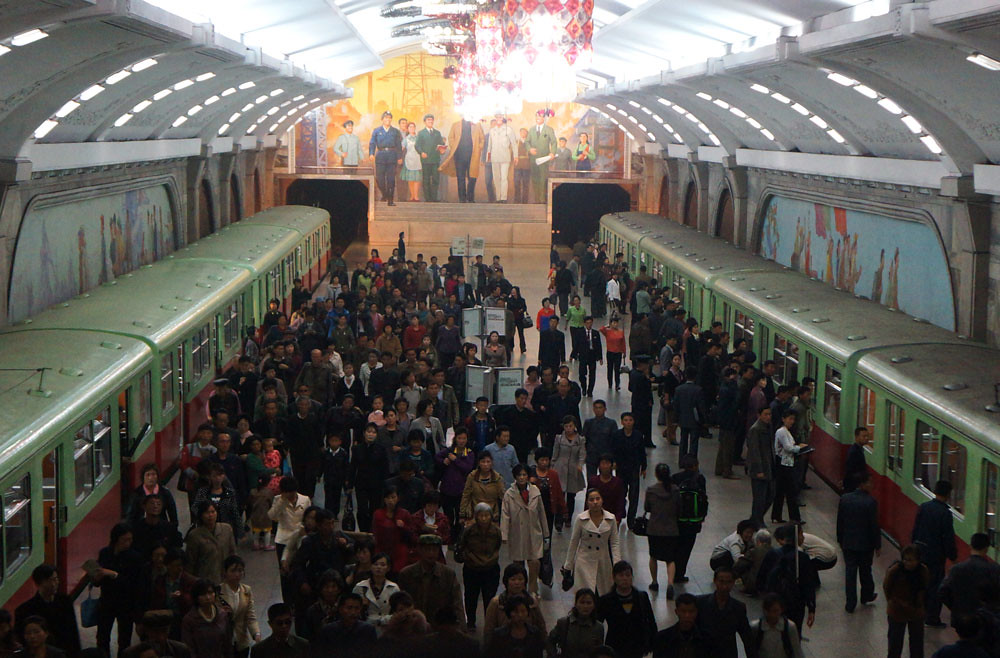 Where else in the world can you go sightseeing by taking public transportation?

The Pyongyang Metro is one of the most popular tourist attractions in the city.

It is the world’s deepest metro system and a key part of the city’s transportation network.

The Pyongyang Metro station is clean, stunning, and abundant.

There is a wealth of art and design to admire in the hallways, and the many mosaics are a visual treat for visitors.

But while it has a colorful and lovely aspect, it can also be quite intense during peak hours.

You may even be provided a seat in a busy cab simply because you are a foreigner, a testament to the famed Korean kindness in these well-kept stations.

When you’re in Pyongyang, be sure to check out Pyongyang Metro! You’ll be amazed by the uniqueness of this attraction.

This zoo is just like any other zoo you’ve been to before.

You’ll stop at cages to appreciate the animals’ surroundings during your journey.

Many different species of animals can be found in this Pyongyang zoo’s indoor and outdoor habitats.

For the first time since 1959, it reopened to the public in 2016 after undergoing extensive renovations.

Visiting the entire zoo here will take at least a few hours.

Keep an eye out for the hippo enclosure, where you’ll be able to get up close.

This includes an aquarium hall, where visitors can spend time with sharks and other marine life.

The zoo’s trained animals perform for guests in a dedicated area.

Natural history exhibits are also on display in the museum.

If you get peckish, there are plenty of snack and beverage stands where you can satisfy your cravings while taking in the sights.

National holidays and Sundays are the best times to visit. By then, you’ll see a crowd of people having a good time. 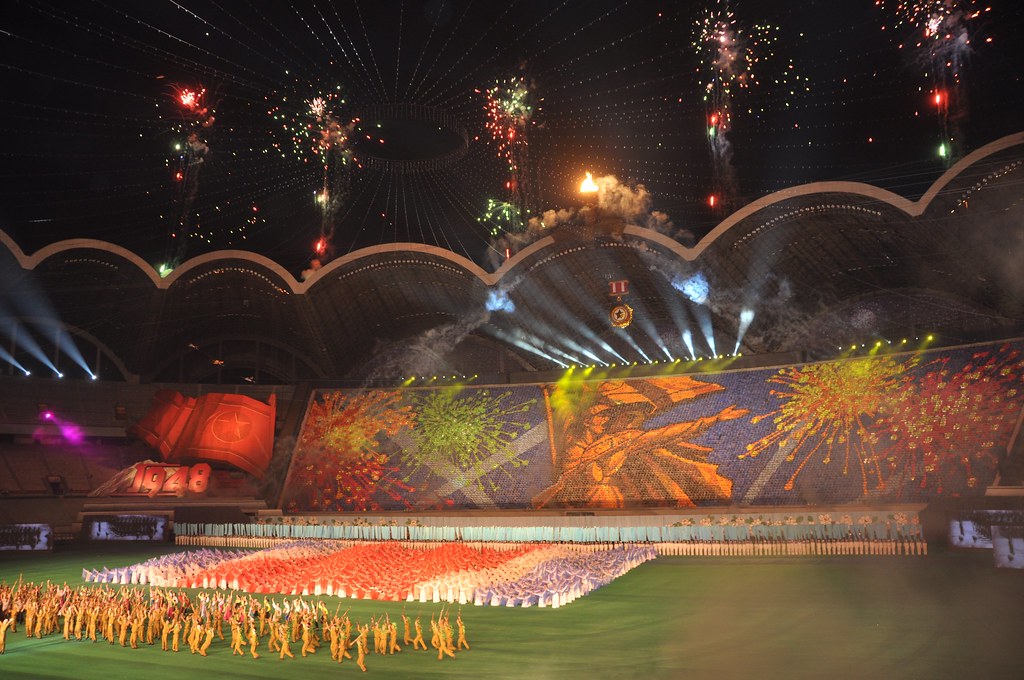 Explore the city’s most magnificent stadium!

Sports lovers worldwide will be impressed with the Rungrado May Day stadium.

It was inaugurated on May 1, 1989. Rungrado Island is located on the Taedonggang River, and that’s how the stadium is named.

It was made to look like an open parachute and was based on a flowering Magnolia.

The most typical use of the stadium is for athletic events. However, it can also be used for many other things.

Its world-class facilities and lush green fields make it an ideal location for sporting events and large-scale global gatherings.

The stadium hosts a variety of sporting events each year.

The Mass Games were the most well-known event to take place in this stadium and made it famous throughout the world.

The Mass Games were also recognized in the Guinness Book of Records for having the largest gymnastic show ever.

The stadium in Pyongyang is a stunning sight to behold!

Tower of the Juche Idea 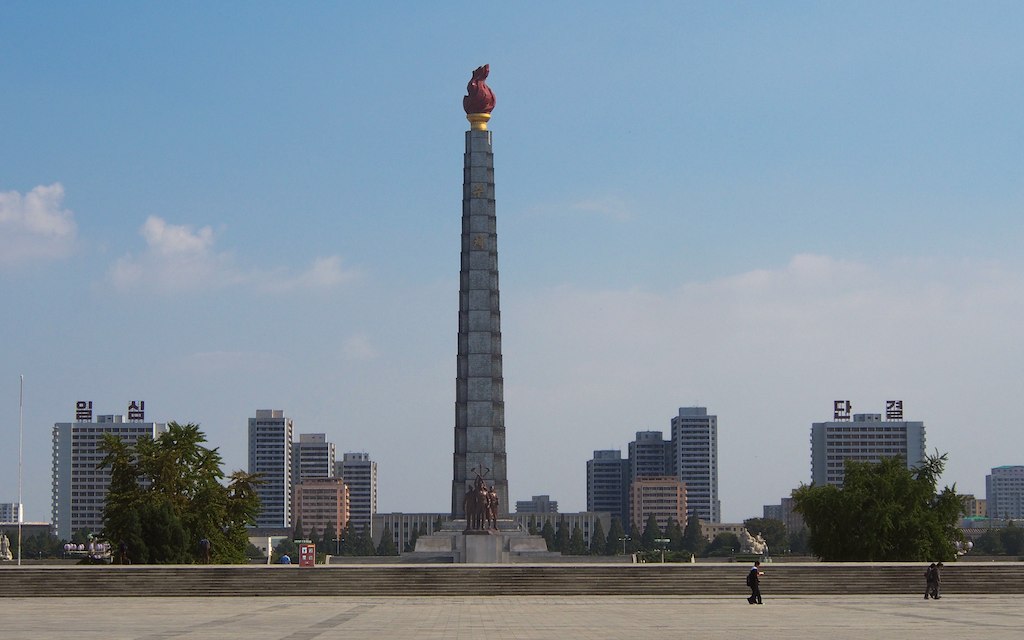 Visit Pyongyang and view the Juche Tower, one of North Korea’s most famous landmarks.

Juche Tower is a terrific place to round off a day of sightseeing in the city with one more look around.

Taedong River’s east bank is where the tower stands.

The construction has a distinctive layered stone tower-style capped with a glowing torch.

Additionally, the tower’s base is open to the public, so you may take a trip up to the top for a breathtaking 360-degree panorama of the city.

Additionally, a guide from the Juche Tower will accompany you to take you around the neighborhood and point out the city’s most notable landmarks as seen from the tower’s vantage point at the top.

For those terrified of heights, you can walk down the tower’s base and to the entryway, where a wall of plaques awaits.

This stunning skyscraper is a must-see when visiting the city.